2020 may have not been a great year (Well, a Dumpster fire to be honest..) But Disney and Pixar aimed to help cure the 2020 blues with their newest film Soul. We meet a man named Joe Gardener (Jamie Foxx), a Middle School Band Teacher who has a love for Jazz but his life hasn’t gone as smoothly as he expected it to but when he is transported to another Realm while helping another try to find their passion, he soon discovers what it means to have a Soul. The film was originally set to be released on June 19th, 2020 but then came COVID-19 and it was delayed to November 2020. But luckily, Disney would cancel the premiere in theaters altogether and move Soul onto Disney Plus for a Christmas Day Premiere.

First and foremost, this film tackles some of the questions that many of us have been losing sleep over since childhood. Why do I exist? What’s the point of being alive? What comes after? Kinda rare to see an All-Ages Animated Film tackling a deep and metaphysical territory but it’s not the first time that the studio has directed visual and storytelling resources that move toward philosophical themes. “Soul” follows a similar path that “Coco” followed when it comes to showing a variation of the Afterlife but also follows the path joining the film “Inside Out” when it came to introducing abstract concepts into characters and vivid landscapes. Director Pete Docter, Kemp Powers and Mike Jones (Screen Writers) move Pixar deeper into the expansion of Realism; conquering the sea and scales of “Finding Nemo“, The scares and laughter of “Monsters Inc.“, the Metal and Rubber of “CARS“, and finally, cooking and vermin of “Ratatouille“. These animators are setting their sights higher with each film and their hard work and determination do not go unnoticed.

Pixar projects have visited a lot of actual places such as Paris, the Great Barrier Reef, San Francisco but this is the first time the studio dived fully into the multisensory of a living city, but they weren’t afraid of visiting. The sensory riot of the city includes squalling car horns, clattering trains, bagels, slices of pizza, barbershops, subway platforms, and the perpetual-motion bustle of pedestrians, strollers, yellow cabs, and more (People might have gotten tired of hearing these noises but with COVID putting a brake on everyone’s personal lives, its something people probably miss right now.) 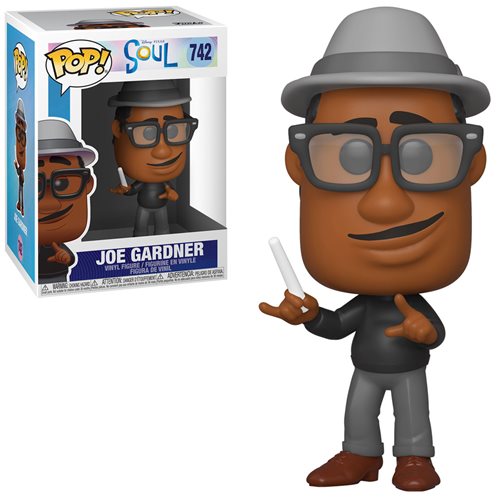 Soul, the 2020 computer-animated comedy film from Walt Disney Pictures and Pixar Animation Studios, brings us this Soul Joe Pop! Vinyl Figure… with a lot of help from Funko! Featuring music teacher Joe Gardner from the movie, it measures about 3 3/4-inches tall and comes in a window display box.
Advertisements